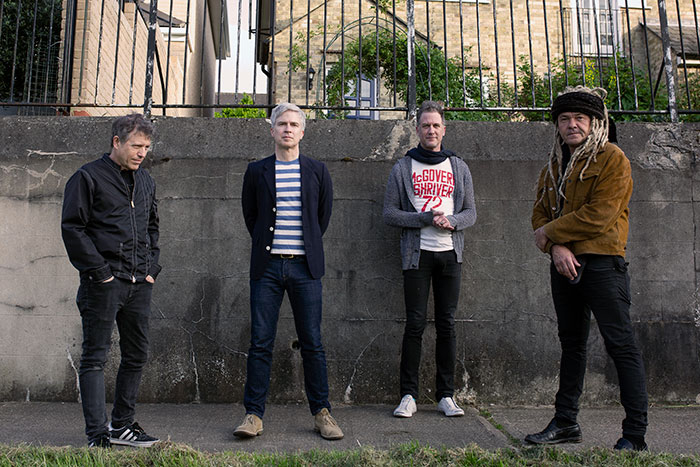 Nada Surf today premiered the powerful music film for "Just Wait", an extended visual interpretation of one of many highlights found on their acclaimed LP Never Not Together. An ambitious, evocative collaboration with award-winning filmmaker Mark Pellington, "Just Wait" is streaming now at YouTube.

In other extended-version news, an official Deluxe Edition of Never Not Together will be available at digital and streaming services Friday, November 13. The newly expanded collection is heralded by the brand new track, "Stories Going 'Round," recorded last year at the legendary Rockfield Studios in Monmouthshire, Wales during the Never Not Together sessions and available now. The deluxe edition also includes two other never-heard-before songs as well as versions of the hit "So Much Love" in French and Spanish.

Founded in 1992, Nada Surf (Matthew Caws, Daniel Lorca, Ira Elliot, and their longtime friend and collaborator, Louie Lino) has only grown more creative and resourceful as time has marched on, each consecutive release notable for the quality of its craft as well as Caws' ongoing growth as both songwriter and human being. 2018 saw the New York City-based band celebrating the 15th anniversary of their seminal Barsuk Records debut album, Let Go. In addition, Nada Surf recently marked the 20th anniversary of 1999's North 6th Street, a long-unavailable collection of early demos recorded upon the band's initial formation, by making it available on digital services for the first time. Never Not Together follows 2016's acclaimed eighth studio recording, You Know Who You Are, and live album, Peaceful Ghosts (recorded alongside Vienna's ORF Radio Symphony Orchestra and Potsdam's renowned Deutsches Filmorchester Babelsberg).

Nada Surf have also announced a string of North American tour dates for Spring of 2021. Information and ticket links are below